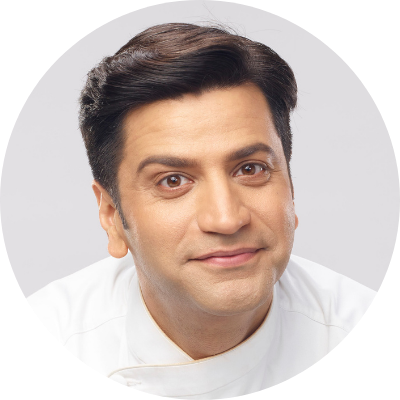 Chef Kunal Kapur is a well-recognized Indian celebrity chef, restaurateur, and media personality known for his food-focused television shows, cookbook and hosting High dignitary’ events in the country. He is well recognized by the Ministry of India and was given an opportunity to present Satvik cuisine to Prime Minister Narendra Modi and German Chancellor Ms. Merkel, in Bangalore. He also cooked for 42 first ladies on the India Africa Summit besides an interactive cooking session with them during their recent visit to India.

Chef Kunal has an in-depth understanding of regional Indian cuisine having learnt it from the best in the industry during his early career. He is equally adept with innovative Indian cuisine that is at par with the best culinary standards in the world.

Kunal is well recognised as the judge cum host for television shows Masterchef India and Junior Masterchef India. He was invited to judge the semi finale of Masterchef America with Chef Gordon Ramsey. Vir Sanghvi quoted him as “The real star of Masterchef India”. His other very popular shows “My Yellow Table”, “Pickle Nation” & FitFoodie make him a cherished  household name. Pickle Nation was the most watched food & travel show in its slot across competition. Chef Kunal has also filmed two seasons of the Travel & Food show in the US called ‘The Foodie comes to America’. His other travel & lifestyle shows are Dubai Dairies and Swiss made. His latest culinary & travel show Utsav Thalis of India, on Living Foodz was the top rated show across food & travel shows.

Winner of several culinary & television awards, Kunal has been recognized amongst the Best Chefs in India by National Weekly Magazine – India Today. He has been honored with Dr. S. Radhakrishnan National Media network award. The Indian Television Academy awarded him for the Best Jury/ Anchor on television for Junior Masterchef India. Kunal is the proud recipient of the prestigious “Sir Edmund Hillary Fellowship 2012” from the Government of New Zealand in the field of Food & Beverage. He has proudly won 6 times best restaurant awards in a row for his restaurants. This year he was honoured with The Most Enterprising Brands & Leaders of Asia Award, by WBR India. Kunal won the prestigious “Best Food Entertainer” of the year for his food & travel show Utsav, Thalis of India by the epicurean guild awards.

He successfully runs his Progressive Indian restaurant called “Namak” in Abu Dhabi, UAE which has received the best Indian Restaurant Award in the first year of inception by Time Out,Abu Dhabi & Whats On, Abu Dhabi.

His cook books include – ‘A Chef in Every Home’ and “Kunal In the Kitchen” both of which are a complete family cookbooks.

Chef Kunal is actively involved in the digital world by creating food & travel content under his own production house & his studio. He is one of the top chefs on the digital platforms in India with his cooking classes.

He has worked with top brands of the country & curated content for their products.

Kunal supports animal welfare and runs a campaign to feed, nourish and help recover animals. He is on a ongoing mission to take care & feed more than 80 stray dogs, cattle and hundred of birds daily. He is actively involved in training underprivileged & unemployed youth in cooking and raising funds to make their own sustained food business.

Kunal Kapur was born and brought up in New Delhi and pursued his education in Hotel Management from Institute of Hotel Management, Chandigarh. He has worked with some of the leading hotel chains like the Taj Group of Hotels and The Leela group. Besides this, Chef Kunal is passionate about– Food, Automobiles, Photography, Travel and History