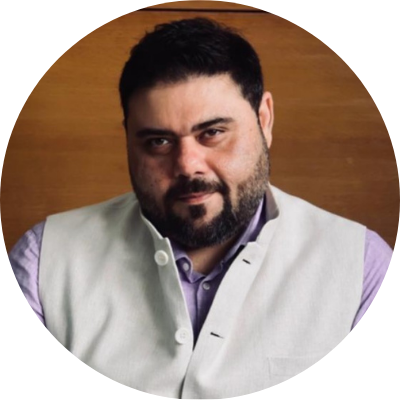 Riyaaz Amlani is an entrepreneur and restaurateur based in Mumbai, India. He is the CEO and MD of Impresario Handmade Restaurants and the former President of National Restaurant Association of India (NRAI) from 2014 to 2017.

Starting out as an outsider to the hospitality industry, today Riyaaz is a highly respected leader in the F&B industry in India. He is known for his uncanny ability to provide unusual and novel experiences in all his ventures. Having sold shoes as a teenager, Riyaaz completed his education at UCLA with a Masters in Entertainment Management. On returning to India, he started working as an entertainment consultant for many location-based entertainment centres.

During this period, he contributed to the building of India’s leading family entertainment centres as well as set up a wellness centre. He soon took over the reins of a leading media company, but gave it all up to open a café in partnership with Kiran Salaskar. His vision was a café that offered an experience beyond the ordinary. This gave birth to his maiden venture Mocha – Coffee & Conversations, considered a pioneering venture in the F&B industry back in 2001. Since then, Impresario has become synonymous as the café expert in the country.

Growing rapidly under Riyaaz’s leadership, Impresario is set to expand its signature brand SOCIAL (an all-day café and co-working space that morphs into a high-energy bar post sun down), antiSOCIAL (a state-of-the-art performance space with strong F&B offerings), Smoke House Deli (a European all-day deli and bar), and FLEA Bazaar Café across India. A strong focus remains the growth of the two flagship brands SOCIAL and Smoke House Deli in Tier 1 and 2 cities, and brand Mocha (gourmet coffee shop) in Tier 2 and 3 cities.