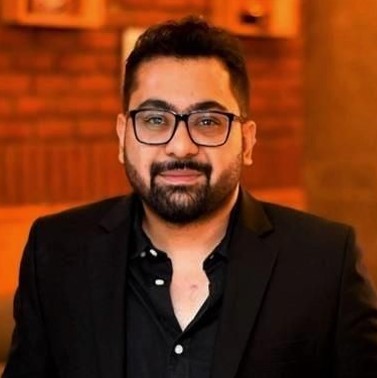 Hospitality success stories are often dominated by those strongly associated with the industry. However, Amit Bagga, with his roots in a family business of automobiles, is an exception. He has cemented his place, one successful venture after the other since 2010 through sheer business acumen and love for excellence.
Today he is C.E.O. and co-founder of Daryaganj Hospitality, which owns the much-loved brand Daryaganj – By the Inventors of Butter Chicken and Dal Makhani. From a single restaurant in April 2019, it grew to 4 outlets across top locations in Delhi-NCR in just 1 year and is growing further. It also recovered fast from COVID-19 implications and has proven to be resilient. International locations like Sydney, Dubai and Toronto are planned for 2021.

Amit’s enterprising nature has helped him find success in other industries as well. He is the co-founder of a digital out-of-home (DOOH) media business called EyeTalk Media Ventures which owns 2,500-plus digital displays in 30 cities across India and around the globe.

Success comes to those who innovate. It is no different for Amit Bagga, whose ventures are sprinkled with bespoke and original experiences. Gifted with a creative bent of mind and an astute eye for detail, Amit is a complete entrepreneur, restless to the point of obsession, (after all, everything he does must spell perfection) hungry to learn, but hungrier to translate knowledge into action. He constantly competes with himself and not with others. This way, he manages to bring superior quality and innovation to his products.

Amit has become a trendsetter of sorts. He lives life with confidence, poise, and humility. And, as it turns out, the world has recognised Amit Bagga for his merit. He has been venerated as Fastest Growing Entrepreneur by a leading publication in India, while the India Today Group has featured him in a list of Top 50 Young Leaders of Delhi in their Mail Today newspaper. He has also been awarded as the Entrepreneur of the year for the F & B industry by Indian Achievers Forum. Businessworld magazine chose Amit as a semi-finalist in their 40 under 40 list. Courtesy his wisdom and acclaim, the restaurateur has been a guest speaker at many prestigious events. Also, all of Amit’s ventures have won many prestigious awards. In the year 2021 Daryaganj won the Restaurant of the Year 2021 by Delhiites magazine and EyeTalk Media won the Startup of the Year 2021 by Silicon India.

A forward-thinking and visionary individual, Amit Bagga is, without a doubt, a restaurateur to watch out. Hospitality comes to him naturally, as does creativity and innovation. He brings the best of business to gastronomy and the best of gastronomy to business.

With his eyes set on the future, Amit will continue to grow his business and create employment for thousands of people. He also has a vision to adopt and use technology to the best for every single process of his business.

He has an innate desire to give back to the community and also wishes to create a self-sustaining charity to feed the underprivileged.